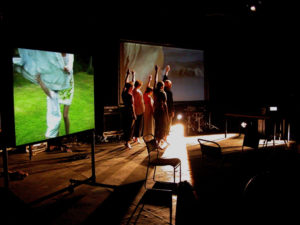 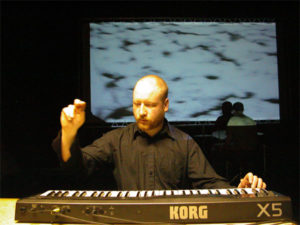 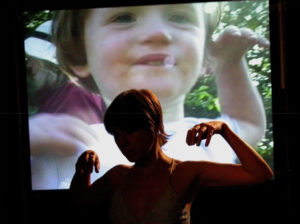 Five hangers-on shared bizarre stories of accidental deaths, killing time before going home, on the eve of something big. Facing the void: like children facing the future, lovers facing each other, the old facing death.

Combining the music of the band Angel Tech with the intimate performance style of Bodies in Flight, this was another powerful piece of performance, where everyday materials – simple language, mundane actions and gestures – fused into poetry. The performance centred on that strange in-between time after the party’s over and before the day that just won’t dawn.

Beginning with a long improvised dialogue between performers and musicians, this show blurred the distinctions between who did what on stage to produce a rock opera on our fascination with how people die and how that most personal of all life-events is shared. This grew out of our growing concern with the theme of generations, with ageing and how one generation passes on its knowledge to another. This show moved from the private language of preverbal twins to the frail voice of an old performer singing a shanty to her lost love. It became not only about death, but how we acquire and then finally lose our capacities and skills, life as all possibility then all memory. This inter-generational theme was further developed by Sara in her three-screen video collaboration with Tony Judge – Triptych.