The Secrecy of Saints 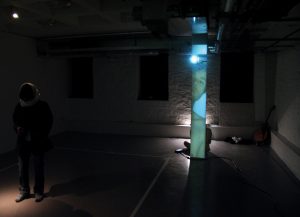 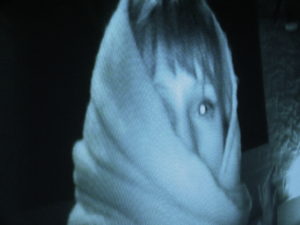 Outside of words/ alongside life/ up against you/ amidst love

For BODIES IN FLIGHT, a new work emerged partly from the previous show’s un-worked material. In this work-in-progress of THE SECRECY OF SAINTS, choreographer Sara Giddens and performer Polly Frame re-used film-maker Tony Judge’s video material of the inter-generational relationships between three women from our recent opera Who By Fire. Writer Simon Jones and musician Neil Johnson (from the band Angel Tech) added new text and music to this re-working to make an in-between work especially for the Live Art festival. Here, we began THE SECRECY OF SAINTS’ exploration of the instant when two strangers’ accidental eye-contact morphed into the mutual gaze of lovers.

This one-woman performance used wireless video technology and a poetic, allusive text to explore the inner workings of the mind of a recluse, isolated from and fearful of the world. This became a metaphor for the fragility of anyone’s identity, the precarious relationship between our senses, our environment and the stories we tell ourselves to give us a feeling of solidity and integrity. Performed four times on one day in a gallery space of Arnolfini, it became a hallucinatory experience for the performer, moving from a closed, anxious figure, physically constrained, to a rapturous, open person claiming her space before her public.