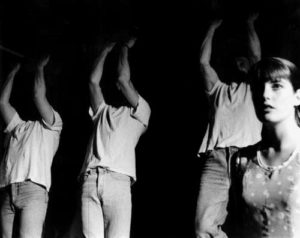 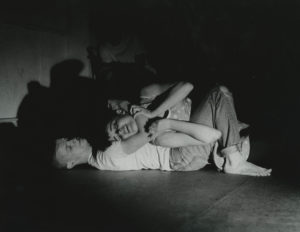 What’re you gawping at? what d’you think you’re doing? + there’s nothing more to be said (I get it, this is a dialogue) + don’t look at me like that: stop peering at me like + like what he said: not a question: you’re the one strutting your stuff (naff, but carry on): I didn’t force you + no: there was no arguing with that: but don’t sit back in your seat like you weren’t responsible (well naff word that, but keep going) + o not scruples: o not education: o no not: he was in full flow: all that jazz (embarrassing) (you started it). (no I didn’t) + I’m going to expose myself physically and (applause, then hush) (hurry up). We settled into our seats, the arguments rehearsed. There’s always one smart Alec that holds up the show. (dim lights). They’re going to remove their (shhh, don’t spoil it). Let’s watch and see what happens (go on then).

We returned to the National Review of Live Art with our second work – a montage of hard-hitting scenes that explored our culture’s exhibitionism, our desire both to see and be seen, to expose ourselves and to peer into the private lives of others, all set to a loud and unrelenting soundtrack. With a curtain that was constantly opened to reveal and closed to tease, the show set out to provoke and challenge the voyeurism that underpins both our popular culture and its experimental and avant-garde counterparts.