Do the Wild Thing! 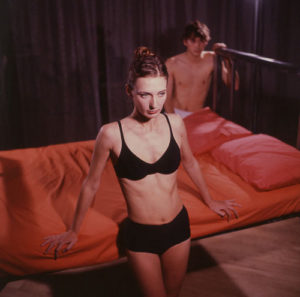 The three lovers are in the big f*** scene. They tried to escape its gravity but the bed centre stage has pulled them in. Like everybody else, that’s the leap their imagination made. Only trouble is it’s only big enough for two. So one must look on, like you and me. And anyway who believes intimacy was only ever two. It’s always been crowded out by that third person, the one with all the dreams. The light burns the bed, scours the skin of the boy and the girl; and the man sees that we see all there is to see in an instant. Then he begins the real exposure. Of what we like to call love, of the motives behind our intimacies, of the overwhelming desire in our tiniest of exchanges, the littlest of our making a move. Of what hides in love itself. And what shows itself through love.