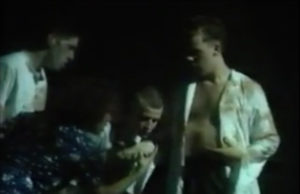 Play dead play playing dead somehow/ by a deployment of bodies in flight (is creation, they say) and properties culled from the commonplaces (you know, Wagnerian musical chairs/ Caravaggio’s nowyouseeitnowyoudon’t) they hope to pull it off.

It is blind faith in the plague that drives them on. Through the various theatrical deaths/ the hysterical posturing.
(Replicate in panic, the old man used to say.) These days to describe is to name catastrophe.
There is an old story-about a body that in flight/headlong down the double helix/freefalling across the desert/actually broke through (by deceiving the third eye). The spectator (incidentally an actor in real life) desires to know the mechanics of the trick (it’s a showstopper).

What turned out to be Bodies in Flight’s first show was a playful piece on how performance can find its roots in children’s games: in this instance, their delight in playing dead and coming back to life. Set to the austere music of Wagner’s Parsifal, an opera about death and renewal, it deliberately trod a fine line between solemnity and parody of physical theatre’s often grandiose concerns, attempting to have its cake and eat it: to enjoy playing dead whilst mocking the po-faced, “cool” performance scene. Working with students from the Department of Drama, University of Bristol, we entered an open platform event at Arnolfini (Bristol) and got selected for the National Review of Live Art (Glasgow); we were then selected for the “best of” NRLA at The Place (London).