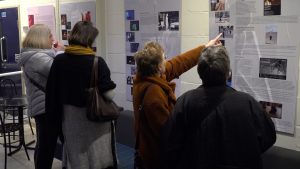 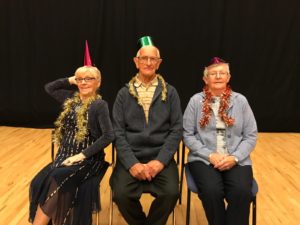 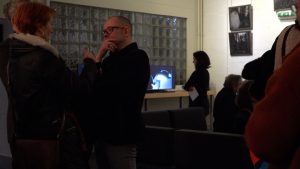 Some reflections upon Bodies in Flight.

A personal memoir of 30 years of the work of Bodies in Flight by Andrew Quick.

Art, in my view, has to offer something. Surely in its most impactful way, art provides us with a new, different perspective on the world, our conversations, our relationships, and our desires.

When I think of the work Bodies in Flight has created, I’m always struck by the generous ways they bring different and multiple voices together. Their work always creates moments where I learn and where I am enabled to consider new perspectives. I see their wonderful collaborations draw out important perspectives on how we can understand difference, understand our community and importantly how they use different languages and artistic practices to tell compelling stories.

Bodies in Flight was one of the first performance companies I saw in coming to study in Nottingham almost 25 years ago and I’ve long been a fan. When I returned to Nottingham, they had to feature in my first festival as Director of Dance4 and I’ve been delighted that we’ve been able to collaborate on so much since.

I feel very moved to be celebrating 30 years of beautiful work with you.

I first came across Bodies in Flight, when I joined the office at Trent Polytechnic- in the Visual and Performing Arts Department – terrifyingly about 27 years ago!

Looking back, I realise now that the bench was set pretty high for me in terms of performance. Having studio spaces like the Powerhouse Studio meant we could see the emergence of companies like Gob Squad, Forced Entertainment and Bodies in Flight.

This was a really special time for me, when I was introduced to live art through Nottingham’s incredible performance scene: we had Now Festivaland Nott Dance. We saw V-TOL, Wim Vandekeybus, and we had Ruth McKenzie and the programming of LIFT festival.

Even amongst these companies, I can really remember seeing Bodies in Flight. It is difficult to articulate something so personal. But when I think of Bodies in Flight, I think of work that is provocative, work that challenges us. Work that also holds us whilst we reach a new awareness.

The music, the words, the movement, film – distinct and yet more than sum of their parts. Always aesthetically beautiful and considered.

I can always recall the feeling – something attractive, assembling in front of me, pushing my thinking – not always comfortable. Then, unfolding into something even more rich and poignant. Like a peony, at its most beautiful as it unfurls and then fades.

But for me, it’s their way of bringing people into the work, to a place that is intelligent, a little bit punk even, but most importantly, for me, a place that is human. Where we can recognise our limitations and our potential, at a safe remove, through the power of their extraordinary artworks.

By the time I joined the Dance team at our beloved Arts Council England, Live Art didn’t seem to have a home – I had a passion for this work and these companies, so I held those relationships.

I enjoyed meeting with Sara and Simon over those years. Such lovely people, and always inspiring conversations and projects! Every time my appraisal came round, I’d be reminded that it wasn’t in my job description. But I knew this company was precious.

As a Creative Producer myself now, I make arts projects with communities, with a focus on excellence. Involving people in challenging and experimental work is, I know, a huge achievement. And this is what Bodies in Flight do so well.

Thirty years. Thirty years is a long time. There aren’t many performance companies that can boast such a life span. I often think theatre companies are akin to bands – born from some youthful exuberance or from some sense of protest and unrest, often to burn out relatively quickly, despite success, amidst much acrimony and bitterness, rowing over royalties, credits, falling out over rivalled romances and a lack of musical direction. Then there those that survive – like The Rolling Stones – traversing eras and momentous changes in history. Hard to know quite who in Bodies in Flight are Keith Richards and Mick Jagger. Maybe Simon and Sara swap roles. That might begin to tell the story of how they have survived. Because it’s not easy doing what they do. Not with the challenges of funding and ever-mutating arts policy. Changing governments, changing councils, changing tastes. But they have continued. Despite it all.

Thirty years. 1989-2019. It’s a long time. I saw Deadplay. I was there at the start of all this. It was at the National Review of Live Art in Glasgow. 1989 – mythirtieth year. Deadplay was beautiful; it was sumptuous; it was loud. Neil Bartlett, who was hosting the event, said to us when we all filed out of the theatre, “I did not see it, but it sounded fabulous”. He was right. I think it was one of the high points of the festival. Making wonderful shapes to Wagner. It couldn’t go wrong. It was also a great title, indeed so many of the titles have been memorable. Do The Wild Thing! a peep show (1996); Iwannabewolfman(1991); Who by Fire an opera(2004); Love is Natural and Real but not for you my love(1990); Model Love(2011); Double Happiness(2000). So, what do I remember about these works? I remember words. Words falling over and around each other; I remember bodies, often hardly clothed, not always young but always beautiful. Moving, swaying, falling, fallen. On the ground. On beds, draped over rumpled sheets. I remember stories of love. Always love and desire – or not desire. I remember people together and people alone – even when they shared the same space. Always alone. And yet I also remember laughing. There’s always been a quiet but telling humour in these works. That’s what I remember doing. Quietly laughing.

Thirty years. It’s a long time. Thirty is often seen as a signifier of crisis, as the moment that marks the passing of youth. But there’s something about love and friendship that keeps the formidable stroke of time at bay. And isn’t this true of performance itself? Performance re-orients time. It replays time, dead or otherwise. Performance is always so full of life and the living. And this sense of life and the living, the quick, is strangely captured by Flesh & Text– the exhibition of Bodies in Flight’s work – even if the documents also speak of time passing and a time long gone, even if they tell us something about the dead, about the departed. I have always loved photographs of past productions. Usually black and white, they cannot help but re-ignite something in our speculation – a re-performance of sorts that somehow places us within the scene. And this sense of being somehow involved, implicated in the action brings me back to the work of Bodies in Flight: sitting there, witnessing performers doing battle with words, with movement, with the very matter of theatre. While all the time I am laughing quietly.